Ngā Mata o te Ariki Tāwhirimātea, abbreviated to Matariki, is the Māori name for a large cluster of stars also known as the Pleiades or the Seven Sisters. Rising for up to three days at dawn in the mid-winter months, Matariki marks the start of the New Year and the changing of seasons for many Māori communities (iwi) across New Zealand. The rise of Matariki signifies a time for family to come together to honour those who have passed on, celebrate the present, reflect and have gratitude for what we have, as well as prepare for the promising year ahead.

In 2022, the New Zealand government decided to recognize and establish Matariki as a public holiday. The date of Matariki will change every year to align with the Māori lunar calendar. This year Matariki is being celebrated on the 24th of June.

As the festival is closely linked to the Lunar calendar, the dates for Matariki vary for various iwi’s across New Zealand and how it is celebrated has some variations. Some iwi’s celebrate when the star cluster is first seen at dawn, others celebrate after the full moon rises or at the beginning of the new moon cycle. Across iwi’s, Matariki is homogeneously acknowledged through proverbs and music about the brightest star in the cluster Whānui. The most common one being:

There are various stories that associated with the legend of Matariki. One of the most common stories being about Ranginui (the sky father) and Papatūānuku (the earth mother) who were separated by their sons Tāne Mahuta (god of forests and birds), Tūmatauenga (god of war and human activity) , Rongomātāne (god of cultivated food) , Haumiatiketike (god of wild food) and Tangaroa (god of the sea). One of their other son Tāwhirimātea (god of wind) was so angry that his siblings separated their parents, that he tore his eyes out and threw them into the heavens where they became the Matariki star cluster.

Others say the six brightest stars in the cluster represent Matariki’s six daughters. Matariki along with her daughters Tupu-ā-nuku, Tupu-ā-rangi, Waipunarangi, Waitī, Waitā and Ururangi, travel across the sky each year to visit their grandmother Papatūānuku (the earth mother) to prepare for the year to come using their unique gifts to bring abundance to the land.

Each of daughters has a gift which helps their grandmother prepare for the coming year.

And Matariki, the mother of the daughters (six/brightest stars in the cluster). She signifies the hope and gathering of the people. Matariki denotes both this individual star and the whole cluster. 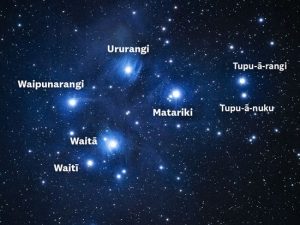 Matariki festivities traditionally involved local communities coming together and having ritual fires to honour and farewell the dead, make offerings and celebrate life, share food, have discussion and celebrate their community. Some iwi still hold traditional ceremonies at dawn at the first sight of Matariki and honour their dead who have since passed on since the previous Matariki.

There is no celebration without kai (food)! Hangi is a traditional Māori feast cooked in a pit dug in the ground. Traditional foods such as seafood, chicken, lamb, kumara (sweet potato) and other vegetables are wrapped in flax leaf (more recently wire) baskets and lowered on to hot stones placed in the dug up pit, the food is then covered with some wet cloths and the whole pit is then covered with dirt and the food is left to cook for 3-4hours! This allows for the steam from the hot rocks to slowly cook the food, resulting in tender meats and smoky flavours.

Modern celebrations of Matariki have evolved but still hold the traditional values of coming together and celebrating as a family and community. An increasingly popular way of welcome Matariki is by flying traditional Māori kites (manu tukutuku).

You can try and make your own Manu Tukutuku with your students.

We hope you enjoy Matariki and all the celebrations that go along with it. This year is an extra special year as the first year it’s celebrated as a NZ public holiday. Remember to take time to reflect and look ahead – and if you get the chance, check out the stars!

*If you do celebrate this festival, please share your celebrations and feel free to tag @Megglobaled as we always love to see students in action with global learning. Mahima is a Program Coordinator at Meg Languages, Australia. Mahima is currently doing her masters in neuroscience is focused on the influences of learning languages on neuroplasticity. Prior to moving to Adelaide, Mahima lived in New Zealand where she grew up and completed her undergrad. An eternal learner herself, Mahima enjoys making connections through science and education in an effort to better understand others and the world we live in. Connect with her on LinkedIn or on Twitter @mahima_shahhh